Company: Detailresult Logistiek has over 1,000 employees and serves more than 200 supermarkets.

A "movingimage" video is embedded at this point.

Unfortunately, we cannot show you this feature immediately due to your tracking settings. To use this feature, please allow embedding this third party service.

After a long and intensive test phase Detailresult Logistiek, service provider to the supermarket chains Dirk van den Broek and DekaMarkt, have asked STILL Intern Transport to supply 34 iGo neo CX20. The autonomous trucks will be operated in the food area of Detailresult Logistiek in Velsen-Noord.

“In the past we had already tried the iGo neo. The results had been promising enough to keep an eye on the technology. Although the processes in our distribution centres have already been optimised to a far extent, we always look at possible additional improvements, as for example the use of autonomous trucks”, says Arjan Warmerdam, project manager at Detailresult Logistiek.

The 34 iGo neos recently ordered from STILL made an additional optimisation possible. The intelligent order pickers will be delivered in two batches. The first delivery is planned for November this year. The second batch is expected in January 2018.

Up to 47% more productivity

The iGo neo follows every step of his operator when at work, always keeping a safe distance to the racks and possible obstacles so that the operator can fully concentrate on his work. This substantially increases pick performance and reduces misspicks. Independent tests have shown that these trucks allow increases of productivity by as much as 47% compared to conventional order picking.

Intensive testing at Detailresult Logistiek has confirmed the results of the prior tests. “The exact increase in productivity depends on the picked items and the picking route”, says Warmerdam. “If the distances between the stops are not too far, the operator does not need to get on and off the truck and that makes him more productive.”

Besides the increases in productivity, the practical test at Detailresult Logistiek has also shown that working with the iGo neo reduces the physical workload of the operator. Now the operator does not need to get on the truck for every bit of driving. “The employees have experienced that this way to work causes less strain on knees and back. The employees have to get on and off the truck several hundred times per day. According to Warmerdam, “This costs time and is a great physical burden for the workers.”

According to the project manager, the type of control of the iGo neo offers important benefits. Warmerdam: „We have compared the order picker with other autonomous industrial trucks. Other brands are controlled manually, for example, with a glove or a box worn on the belt. The iGo neo does not require this sort of control.” As soon as the operator leaves the truck and pushes a button on the vehicle, the iGo neo ‘keeps an eye’ on the person who pressed the button with its 360° scanner.

If the operator moves on to the next pick stop, the truck will automatically follow. If the operator stops at a given place, the truck will stop as well. “First we had to get used to it, but then all the employees liked this way of work. It really keeps their both hands free and they can fully concentrate on order picking.” Warmerdam adds.

With the introduction of the iGo neo, Detailresult Logistiek switched to multi client picking where three rolling containers are picked on one trip to additionally increase productivity. Warmerdam: “The possibility for multi client picking was one reason for us to concentrate more on the trucks in a certain sector. If this turns out to be successful, we will surely check the potential to adjust the existing order picking processes and deploy the iGo neo in these areas as well.” 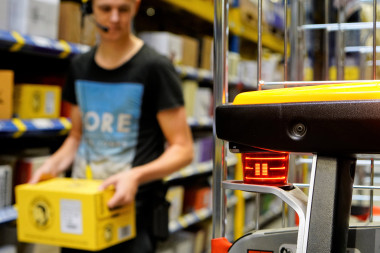 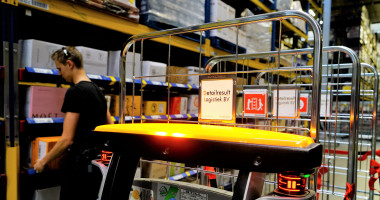 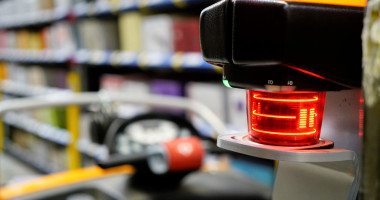